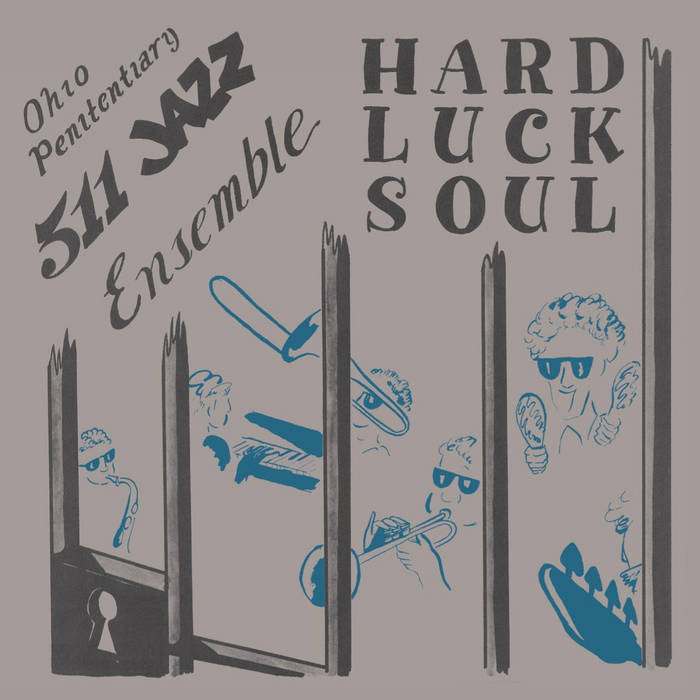 If musical accomplishment is anything to go by, the members of the Ohio Penitentiary 511 Jazz Ensemble would immediately be given their pardon. Their privately-pressed LP from 1971 is a legend in obscurity, and a master class in what can be achieved in the most trying of circumstances.

The 511 Jazz Ensemble was made up entirely of serving prisoners in the Ohio State Penitentiary. It was founded in 1971 to give those prisoners with a musical aptitude an opportunity to be productive and creative.

Band leader Reynard Birtha was originally from North Carolina, where he played in a band called 'The Outer Limits' before getting into a scrape with the law and being incarcerated by the local Sheriff's office. During a stint on a Southern style road gang he escaped and ended up in Cincinnati, and through a mutual passion for music he met fellow musician Logan Rollins, nephew of jazz legend Sonny Rollins. They became friends and jammed at local clubs before both ended up in the State penitentiary, for reasons not entirely clear. At the time it was customary for musicians to visit the prison and give concerts, especially during the Christmas period. Reynard remembers renowned musicians such as Art Blakey and Kai Winding giving recitals at the prison. These visits were not only a source of entertainment for the prisoners, but they were also a source of inspiration for musicians like Reynard. He and Logan formed the 511 Jazz Ensemble, incorporating the remnants of the prison Pit Band. Reynard recalls that the number 511 was the PO box address of the prison, and we would perform in the yard during every holiday, while the prisoners marched around and got their food.

Both Reynard and Logan had been to music conservatory and could read, write and arrange music as well as play in any musical key, unlike most of the rest of the band, which gave rise to difficulties in keeping the project going. However, with their enthusiasm and perseverance came success, when the visiting Ohio State University Band were so impressed after jamming with the inmates that they returned to make a record. Funding was put forward by a wealthy club owner and his conglomerates from Columbus, microphones and studio equipment were brought in from the outside and the recordings were made in the auditorium of the prison chapel. Unfortunately, as far as the business side of things was concerned, Reynard admits he was 'green' and didn't receive any payment for his efforts. In fact to this day he has not even seen let alone owned a copy of the LP, the album which contains his sole recorded output, All I knew what to do was how to read, write and play music.

The 'Hard Luck Blues' LP was the band's only recording, and the group disbanded after the release of Logan and Rollins. The music on the album comprises of four long tracks, each allowing the soloists to express themselves without restriction. Free of chains at the time the music is made, the result is a unique, compelling insight into the freedom that jazz can afford, giving a sense of hope and liberty to free and incarcerated men alike.

As dedicated record collectors, we at Jazzman love nothing more than discovering good and obscure soul, jazz and funk records. We also love making those records available to everyone else by reissuing them as high quality releases on LP, CD, 7” and as downloads. We continue to scour the world to find interesting and rare records to re-release... We Dig Deeper! ... more

Bandcamp Daily  your guide to the world of Bandcamp

Featured sounds by K.Spark and WIZDUMB, plus Basi joins the show to discuss his latest release.